Waste is not good business – Webinar with Circular Communities Scotland 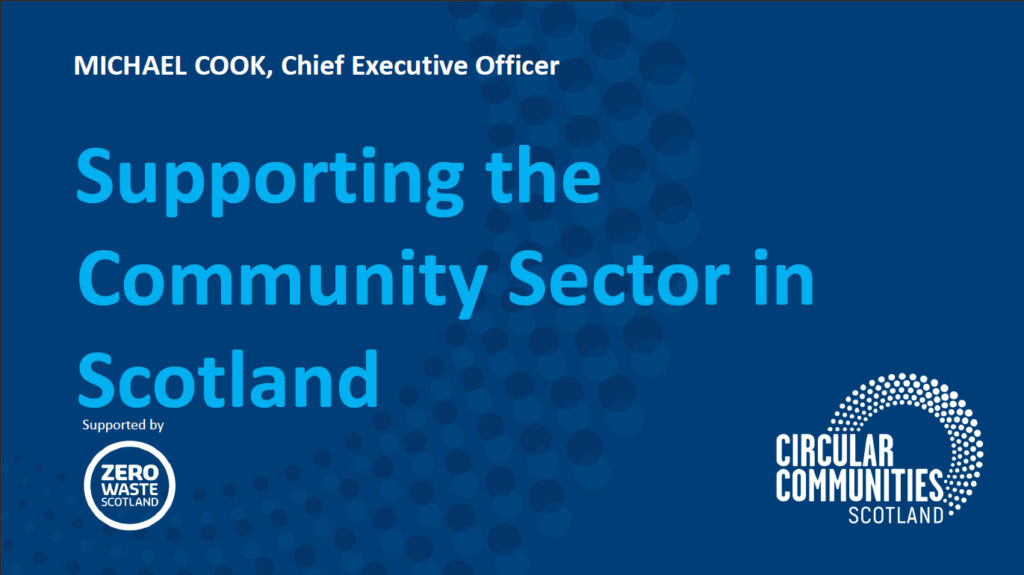 On 30th June, we had the opportunity to learn from CEO Michael Cook about how Circular Communities Scotland supports organisations from the community sector in their reuse, repair and recycling activities.

The vision that drives Circular Communities Scotland is to empower local communities in Scotland to create a circular economy and for them to benefit from its impacts. The organisation has members from the community sector including repair, reuse and recycling charities and social enterprises. At its core is the belief that for change to happen, it is paramount for people to be involved and people belong to communities.

Within their work, they support and represent reuse, repair, recycling and sharing libraries and act as an intermediary to bring support, training and resources for the sector to grow.

Members benefit from events held to connect and learn as well as conferences or technical workshops. Circular Communities Scotland also actively promote and communicate the need and impact of the work in the sector and to recruit and share information. They also assist with development and help organisations with advice on setting up a project, help make it grow and scale operations. In addition, they have a few grants for financial assistance.

Some of the projects Circular Communities Scotland run include:

Circular Communities Scotland are funded by the Scottish Government and Zero Waste Scotland. Still, they have worked to diversify their income through trading, sponsors, paid memberships and paid consultancy work. This additional funding means they can offer more value to those that need their service.

The number of their members doubled in a space of two years, it went from 115 in 2019 to 229 in 2022, many of which are existing charities that have not been in circular economy but have started a circular economy project, or new startups joining for support. A trend they have observed is a shift in members from recycling focused to ones focusing on reuse and repair. They have also observed that with changes in society, more people are interested in climate change.

Among the key elements that drive the community sector’s impact are people with many of their members aiming to create jobs. Through shifting to a circular economy, every 10,000 tonnes of waste can create over 300 jobs, including in landfill, recycling and incineration and the vast majority in reuse and repair.

Waste, according to Mr. Cook is not good business and new business models are needed that are based on sharing, leasing, repair or others based on circular principles. Achieving a circular economy brings environmental benefits for the planet including reduced carbon footprints, pollution and biodiversity losses.

Places are also another key element, as caring about places, regenerating the high street, currently being lost because of the increase in online sales, with local production sites can play a role in circular economy.

Every quarter, Circular Communities Scotland publish the Reuse Consortium, an impact report that demonstrates the benefits of purchasing reused items and what has been delivered in the context of the budget of a local authority. By diverting waste from the landfill, since November 2016, almost 10,000 low-income households have benefited from reusing 22,500 furniture items and local social enterprises have been able to generate income. Local authorities have also saved money over buying new items, allowing for their budgets to reach further.

When it comes to carbon footprint in Scotland, 82% is associated with products and services. On the way forward to tackle this, a move to a circular economy is paramount. To achieve this, changing to a system that works so everyone knows where to put their waste in an easy and convenient manner while having the personal and environmental benefits clear will ensure a move upwards in the waste hierarchy. While establishing such as system, changing mainstream behaviors and consumption patterns would then ensure waste is diverted from the landfill and brings a step further from recycling, repair or reuse, to waste being minimised or prevented.

The Circular Based Waste Management project is funded by Iceland, Liechtenstein and Norway through the EEA and Norway Grants Fund for Regional Cooperation – www.eeagrants.org. 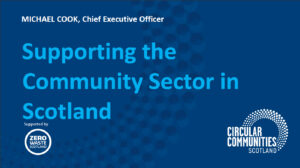 Waste is not good business – Webinar with Circular Communities Scotland

On 30th June, we had the opportunity to learn from CEO Michael Cook about how Circular Communities Scotland supports organisations from the community sector in 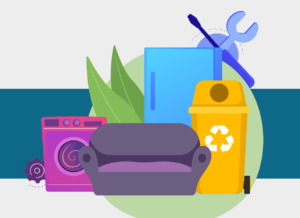 You are kindly invited to the upcoming webinar regarding circular economy initiatives in Scotland. The webinar will take place on: Thursday 30th June 2022, 15:00-16:00